The Mayor of Mount Sinai 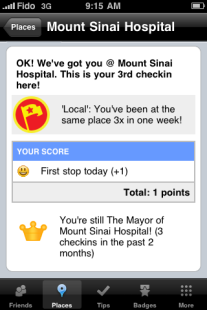 I never really thought of myself as being Mayor material, but apparently I was wrong. I’ve been spending so much time at Mount Sinai Hospital of late that I have officially been named its Mayor by FourSquare^!

For those of you who like to roll old school and who shirk all things social media, think of FourSquare as a location-based Twitter. You “check in” when you arrive somewhere, your friends are notified of where you are, or, to which of your friends you’re in closest proximity, and when you accumulate the highest number of visits, you become the “Mayor”. At some places, there are perks to becoming Mayor, like getting a free coffee or 10% off your bill. Because I ‘ve only been named Mayor at a few places, none of which offer these lovely perks, I haven’t yet realized any of these niceties! Also, because of the fact 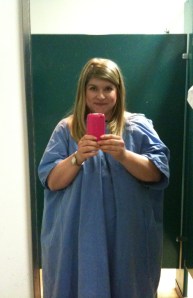 that Canada has universal healthcare, my Mount Sinai visits are free and, therefore, do not come with any perks other than getting well again. Ahem. There are about one billion other places I can think of for which I’d rather be Mayor and can assure you Mount Sinai isn’t one of them. Although, I had a CT Scan there this week and I thought I looked pretty cute in the blue dressing gowns. Formless cotton may just be my thing after all*. 😉

^I really prefer Gowalla, though — the UI is way better and, even though I don’t get to be Mayor, I have both a metal robot and firecrackers in my backpack, which we all know is way better than being Mayor. 😉
* Not!